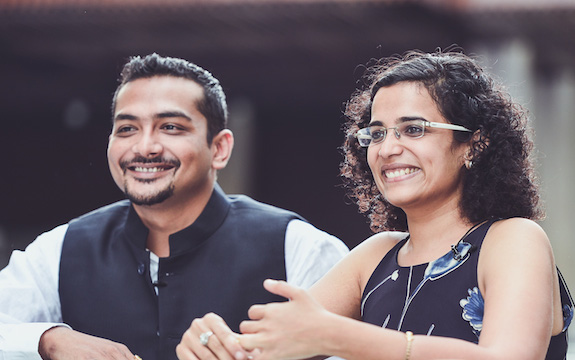 This is a post by Garima Jain, who met her husband, Kumar, at a Floh event.

It all started with a Floh event – my first (and as it would turn out – also my last.) A group of people were divided into teams to compete against each other on a game of bowling. I, with my ‘terrific skills’ of barely keeping myself off the gutter, was here to meet people from a city I was completely new to. I could see others also having fun, just as I was. And then, there was this one person – in a lane far away – rolling strikes after strikes. Soon, everyone would stop to watch him roll. My team, probably most distracted with the fun, the food, the conversation, and most evidently ‘the Dude show’, were the last to finish our rounds. And, as we did, I realised ‘the man’ himself was still hanging around watching us finish. It was my chance to start a conversation – and I did. We walked over to the brunch place next door together and sat with the other bunch of people to carry on the conversations.

As food and drinks were being served, someone from the group passed me a bowl of chicken. I declined saying I was a pescatarian and don’t eat meat. In no time, ‘miraculously’ a bowl of prawns arrived in front of me. Someone else asked me for a drink, and I said I may have one in sometime. And, again, a drink was in my hands in no time. I obviously noticed the person behind these surreptitious actions, the same dude, and I will not disagree if some one claimed they saw me blush that time. I thought this was enough of a signal, and it might be good to start a conversation. I started with most mundane – to know what he did for a living. And, with an evidently surprised look on his face, he said, “I work with Floh.”

With that – while my bubble of dreams and imaginations was bursting in the background – I had to somehow continue the conversation. But, completely embarrassed of my supposed ignorance, I changed the topic, and soon the person who I was speaking with too.

The rest of the evening went well, and some of us in smaller groups decided to keep hanging out even after the event was over. But all through, I couldn’t stop thinking about Kumar – the Dude. I wanted to know whether he was actually eavesdropping to know what ‘I’ wanted or was that just part of his job description to make everyone comfortable. But most importantly, I wanted to know if he was a Floh member or not, and if we could go out dating. But my fellow Floh buddies came to a quick rescue, and inspired me to ask anyway! And, so I did…

I wrote him a message and asked him out. He replied with an emphatic YES! We met the very next day. The afternoon at a juice centre, turned into a conversation about tabla playing and Israel which turned into a dinner and then a walk to the auto.

Then, several meetings followed, by the families knowing and meeting each other. Going to Calcutta and Delhi and Delhi and Calcutta a few times over and then, I remember walking all dressed up to get married to him.

If you liked this Floh dating story, you might also like “Floh Success Story: It Will Happen When You Least Expect It”