“To see a World in a Grain of Sand

And a Heaven in a Wild Flower,

Hold Infinity in the palm of your hand

And Eternity in an hour.”

William Blake’s words ring in my ears as I look back on a Sunday where waking up at 5:45 am was richly rewarded  with several memorable hours spent in Lalbagh, Bangalore’s famous botanical garden. It was one of those experiences that was at once fun, reflective, informative and had me longing for more; and to tell you the truth, it’s been a while since I came upon one of those!

As you might guess from the way in which I started this post, I’m really not a morning person. If I am to wake up happily, short of 7 hours of sleep, there had better be something that I consider worthwhile and exciting. Today was one of those days – and for it, I owe my thanks to Floh, arguably one of Bangalore’s most innovative start-ups, that for once has nothing to do with technology!

Floh (acronym for Find Life Over Here), started by a charming couple, Siddharth and Simran Mangharam, is an invitation only network of single people who enjoy an active lifestyle. Their mission is simple – provide a safe, engaging and interactive space for single people to meet each other in the context of a shared interest. In a country like ours, where there is a section of society growing uncomfortable with the arranged marriages, Floh comes as a welcome gift for singles who are interested in meeting others like them – people who care about similar things, pursue similar passions, value similar ideals. They’re typically looking for a match where an astrologer and caste stipulations are not involved. They’re looking for mindsets and behaviors that match rather than any societal “shoulds”.

No surprise for me therefore, when some months ago, my mother enthusiastically urged (almost-thirty-and-still-not-married) me to learn more about Floh, after reading about it in a magazine. When I did get around to reading about it, I liked the idea at once – especially because I am fairly new to Bangalore and don’t yet know a lot of people of my age and sharing similar interests. I figured that this was a win-win situation. Quite simply, the best case is that you meet and begin a relationship with a wonderful match. If you don’t, you still have a great chance of making friends with people who share your interests… how often is it that you can work such a situation out for yourself, really? I saw Floh taking responsibility for a tremendous amount of effort that I would otherwise have to expend in building my social network in a new city. I was quite sold on the idea…

So it happened today, that I jumped out of bed before the sun declared it a Sunday, having signed up for my first Floh event – a Green Heritage Heritage Walk, guided by Vijay Thiruvady, the 70 year old Bangalorean businessman who happens to be a world class conservationist and clearly in love with the marvel that is Lalbagh. Floh partnered with Bangalore Walks, to have Vijay host this event for its members. 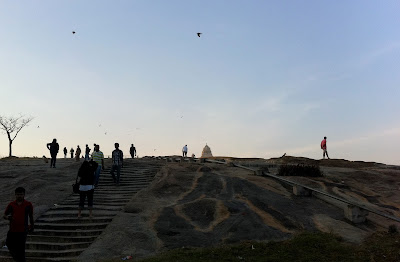 The Lalbagh rock – silent witness to an eternity

We met at the base of the Lalbagh rock at 6:45 am – a group of about 20 people including Vijay and Siddharth. Sleepy eyes stood out in some faces (probably my own included) while others appeared positively chipper. I saw some people greet each other happily, having met at previous Floh events, while freshers like me made a few introductions – the initial awkwardness eased away by Siddharth’s relaxed, gentle style of making people comfortable. Birds called as the sun climbed higher and higher into the sky, the occasional two wheeler was parked noisily near the parking lot adjacent to us, snatches of laughter went up from the group as people got ready for the walk. And then Vijay started…

A septuagenarian, sprightlier than many people decades younger than him and speaking in clipped, impeccable English – Vijay was our guide for the next 4 hours, in a walk that started from the “Hero Stone” near the Lalbagh Rock, meandered through a bewildering variety of trees, each with their own unique story, and ended in a delightful breakfast in the historic Mavalli Tiffin Room (MTR) near Lalbagh.

Facts, dates and insights poured out of Vijay as he took us on a trail that he has guided many a group over, Sunday after Sunday for many years. I learnt that the Lalbagh rock is more than 3.5 Billion years old – formed when the earth’s crust was just settling down! It is older than the Himalayas, making those mountains appear infantile at a mere 50 million years. I learnt that a certain fig tree has fruits with flowers inside its fruit – flowers that would that would never get fertilized if not for a species of tiny wasps that live within the seed and unerringly fertilize only the flowers of similar trees. I learnt that bamboo specimens from the same grove will flower and even die at exactly the same time, even if kept in separate countries. He shared example after example of the miracle that is nature – showing us how everything is linked in an intricately networked cosmos, of which we are all parts. We breathe the air that these trees fill with oxygen, forgetful that our lives are linked inextricably with theirs. They are more complex and hold more secrets than I had ever thought possible. They are as alive as we are… 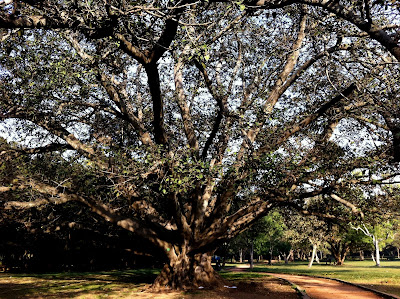 In the height of summer, it is 4 degrees cooler in the shade of this fig tree than it is outside 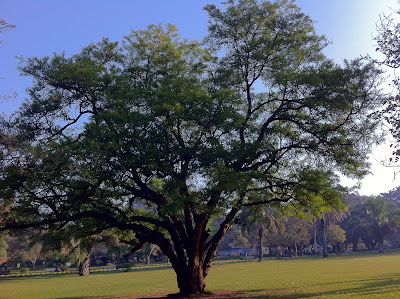 Amla, the Indian Gooseberry has more vitamins than an orange could ever dream of having!

Vijay drew out startling insights that linked plants with history, culture – facts that I would never have gained otherwise. Did you know that potatoes played an instrumental role in the French army’s successful conquests, before an unwitting move saw it decimated in the wastelands of Russia? Or did you know that the curvilinear scripts of Orissa and the states of South India developed because they had to be written on parchment made of a palm leaf that would stand no other form of writing? Did you know that 75 per cent of the vegetables we eat today are originally from South America? Or that opium grown in India helped the British in their attempts to get tea from China? If you didn’t, and if this sort of stuff interests you, you need to go on one of these walks! 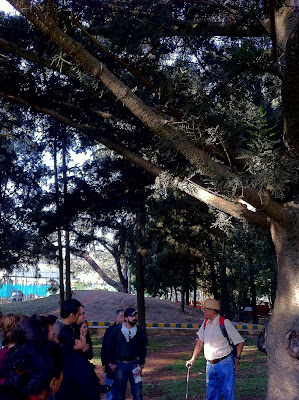 OK, and now you might ask, what was special about the people that were on this walk? I could go on and on (and I have!) like an excited and nerdy schoolboy in a science-club outing, but wasn’t one of the objectives of this trip to meet new people? Yes it was, and I don’t intend to skip over it at all!

For me, the best thing about being in this group was that everyone had come happily because they were interested in the theme of the walk. They were there to explore something special with others who thought it was special too. They asked questions, offered their ideas, exchanged facts and experiences over the 3 hours in which Vijay guided us through the gardens. They related to the glimpse of Eternity that Vijay was trying to give them and they enjoyed the fact that there were others like them experiencing the same curiosity, excitement and moments of wonder. They were, for the most part, going with the flow (or I should say, going with the Floh!) because it was so easy to do that. Jokes, laughter, beautiful smiles rippled through the group all through the walk. Nobody was trying to manage impressions – it was easy to be yourself around others who were being themselves. As we sat down to a superb breakfast with single in the original MTR, I found myself chatting happily with everyone there, feeling quite at home with a bunch of people that I had never so much as laid eyes on before! 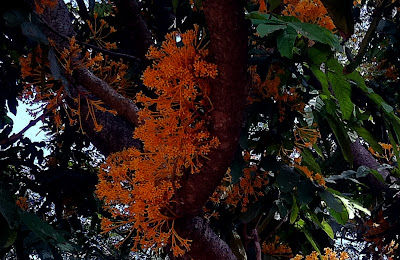 A real Ashoka Tree – the kind that Sita sat under

Will some relationships emerge from this? Probably – and Floh has a great track record of relationships that have formed in the past. It’s probably the only network that celebrates when members leave, as you cannot attend Floh events if you are no longer single! Will I attend another Floh event? Most certainly – and Vijay hasn’t seen the last of me either!

As I take your leave at the end of this long and meandering trail of thoughts (quite typical of me), I want to leave you with something to reflect on. It is this… Like the bamboo plants that share an invisible connection, installed in the very fabric of their being… we too are all connected in some way. It takes only a little effort to reach out and discover what we have in common with each other. Make the effort to discover this – find out where you are linked and how. You may find a soul-mate, a companion, a friend, or even a family along the path – but the path itself is the greatest destination and the greatest discovery.

This is a cross post by Floh member Vir Dasmahapatra