This is a blog post by Siddharth Mangharam, CEO of www.floh.in, a network that connects singles in real life. 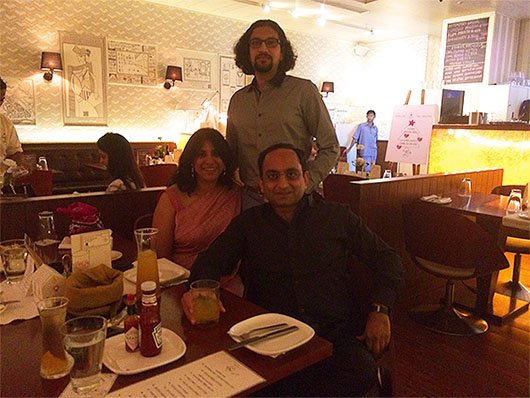 (Floh founders at the Open House in Mumbai on 29th December 2014, just before attending yet another Floh wedding!)

Every so often, you’re lucky to be in the right place at the right time. And, those that joined us on the evening of Monday, December 29 2014, at Smoke House Deli, BKC were the lucky ones. That night, the three co-founders of Floh (Simran, Sid and I) were in Mumbai together, and since Sid is based out of Boston and Simran and I out of Bangalore, I thought it would be a great idea for us to host a Floh Open House. It would allow our Mumbai members to connect informally with the three of us, especially with Sid. So on Monday morning, I sent out an email to our Mumbai members suggesting we meet at Smoke House Deli in BKC at 7 PM that evening.

Since it was incredibly short notice (and a Monday evening to boot), we expected a very modest group and booked one table at the restaurant. Folks started coming in at 7 PM and things went about quite nicely – everybody was engaged in conversations, getting their drinks at the bar and chatting away animatedly. Then suddenly it happened – at about 8 PM, the entire restaurant was taken over by Floh. We had over 35 folks show up and the evening was just bursting with energy. There were folks who’d been with Floh for a while, folks who had signed up but never attended an event and even a few that were contemplating joining Floh.

At about 8:30 PM, a couple walked in together. I recognized the lady as a Floh member from Calcutta; the gentleman was a member from Mumbai. I’m always excited to see members from other cities join us (it happens quite frequently, since our members travel a lot), and went up to greet them. She mentioned to me that they had other plans for the evening but when they heard about the Floh Open House, they decided to swing by and tell us in person that they had been seeing each other for the past eight months! They had met at our flagship sailing event in March and things had just clicked. This was great news and took the energy of the evening up two notches.

By 9:00 PM, Smoke House Deli BKC was transformed into the most buzzing place in Mumbai. Picture this: the bartender’s operating on full tilt, the music is just right, people who’ve never met before are now talking as if they’ve known each other forever; Sid, Simran and I are connecting with like minded people there and the group has become one entity, shifting and flowing with the energy.

Sid, Simran and I had to tear ourselves away from Smoke House at 10 PM since we were scheduled to attend the reception of another Floh couple that had just gotten married that afternoon.

We soon found ourselves in a cab heading to Juhu. This couple met most serendipitously – he was visiting Mumbai on work from London and an office colleague suggested he check out Floh. She was a true-blue Mumbai girl and they met at a Floh event and kept in touch. A year later, he popped the question and we were lucky to meet them and their families at their reception, and a day before they flew back to London!

This was one night when everything turned out right. It was like one of those rare times when a jazz quintet is completely on fire. Everybody’s on the same wavelength, connecting with each other, and everything feels magical, like we’re weaving a spell. What an amazing way to end 2014!

And clearly, the Floh team members have the greatest job on the planet, thanks to our members!