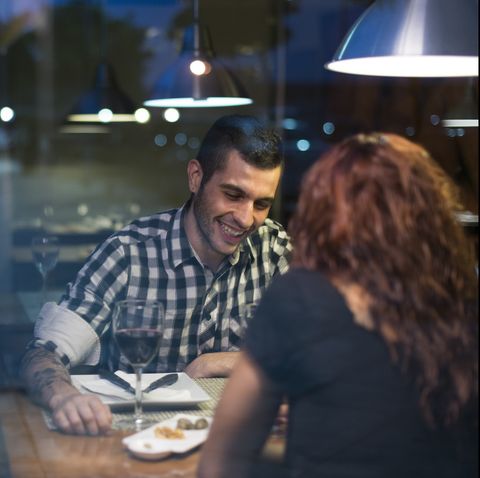 When you’re single, you can either look at every situation as an opportunity to meet someone interesting, or choose to ignore social interactions and let fear of rejection get the better of you. By now, I’ve known better than to choose the latter and appease the Gods of social anxiety. To them I say, “Not today!”

Mystic Man In The Window Seat Shares A Secret

I once sat next to a man on a flight to Mumbai who was about three decades older than me. You know how it goes when you settle into a middle seat in a 3 seat row. First there’s the awkward smile followed by ‘that is my seat’. The person sitting on the aisle seat gets up, you go in, sit down and pray to the Gods to help speed up time. Particularly when the person in the window seat makes it very clear that he / she wants to have nothing to do with you.

This man was different. As soon as I sat down, he introduced himself and we started chatting. In twenty minutes, I felt like I had known him for a long time. We were chatting about all kinds of things, and we got along so well, I couldn’t help but remark that I was very glad we had started chatting. And then he said something that has stuck with me ever since.

“I don’t know if you believe in miracles, but I have found that the easiest way to create miracles in life is to speak to strangers.”

I’ve hung on to this piece of advice ever since and found it to be nothing but true. And the story I’m about to tell you will show you why.

A Woman With An Accent

I’m at the Hong Kong airport, on my way back to India, and the layover is about 2 hours long. I’m walking around the terminal with an empty bottle in hand, desperately looking for the water coolers. I can’t seem to find any. The last thing I want to do is to change money to buy a water bottle. The first instinct is to head to a coffee shop and ask for tap water.

Then I see a woman in uniform headed towards me, and I gather she must be part of cabin crew of some airline. Her walk suggests she is no stranger to this terminal building. I stop her and ask her if she knows where the water coolers are —I was sure I saw so many when I flew via HK two weeks ago.

At first, she is a little taken aback by the question. She just shakes her head and says she doesn’t really know. Her accent hooks me. I say to her, “Hey, no problem, I guess I will just get some from a coffee shop. But,” I say after drawing out a pause as long as possible, “your accent is intriguing, where are you from?”

By this point, she is almost past me, and I am having to turn to face her.

I play the eye game as intensely as I possibly can. I’m half smiling, because I am captivated. I notice the look in her eyes change as well. They soften and are more welcoming, and she playfully responds, “I give you one guess.”

In that split second, I’m trying to figure out if I should be specific or generic. I mean, I’ve heard this accent for years on end when I lived in Dubai, and I know exactly where she is from. The accent is unmistakable.

After intentionally taking time to keep the tension going, after what seemed like a minute but was clearly only about 5 seconds, I say “from a part of the world where you get the best hummus and shawarmas!”

She bursts into a laughter, and by now I am feeling bold.

“I am going to walk with you in the direction you were headed, and if I don’t find a water cooler, I am sure to find a shawarma to eat, because I am hungry now” I tell her, and we start walking in the direction she was headed.

I can sense she is confused by this sudden change in my demeanour. Anyway, we talk about how despite travel being such an invigorating and enjoyable activity, spending time at airports can be so frustrating.

I discover that her flight has been delayed by about 3 hours. And that she doesn’t exactly get along with the rest of the crew on this particular flight. I have to head to my gate in 45 minutes.

So I do the only thing every single man should do in such a situation — I ask if she wants to have coffee with me before I head to my gate.

For a split second, she seems in two minds. I begin to suspect she is going to decline my offer. “At least I tried”, I console myself. And then I do something I don’t do that often — I literally grab her hand and say, “Come on, I am saving you from spending 45 minutes with people you don’t like. Plus, you might fall in love with me and decide to ditch your flight and come with me to Bangalore. So many benefits.”

I suppose you know where this is headed.

We proceed to have an incredibly charged conversation in those 45 minutes. It was an interaction that felt right on so many levels — spontaneous, exciting, honest and full of great vibes.

I had always held that cabin crew can tend to harbour a lot of arrogant attitudes — the glamour associated with the job probably lends to this misconception. Well, this girl helped blast all misconceptions out of my mind. Or at least reminded me to avoid letting my beliefs lead me into interactions.

Universe Moves When You Move

Being single is great fun. As long as you allow yourself to be spontaneous and to take chances. The 45 minutes I spent with her felt as good as anything I had experienced in the company of a girl.

The universe moves when you move.

I don’t think I will ever see her again. Unless I make a trip to Qatar.

Which begs the question.