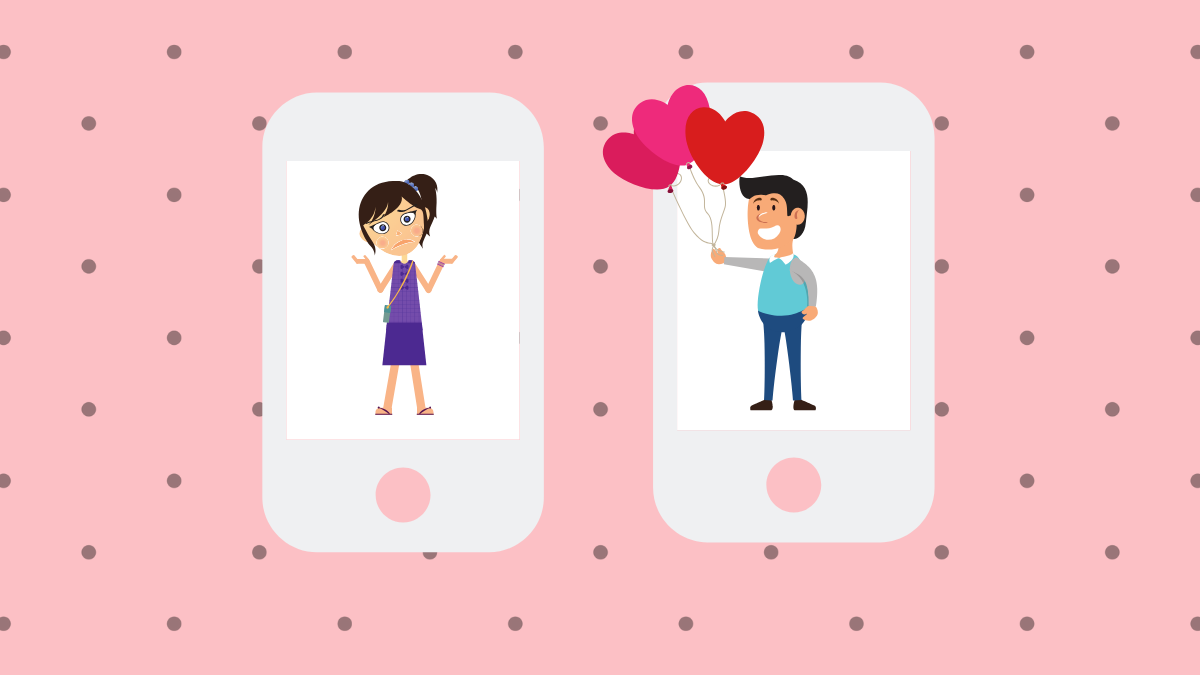 This post is inspired by a post Simran wrote on how online dating will change in 2020 and beyond.

I happened to read it before it was published. Don’t ask how. I just did.

Anyway, the post hit home in a big way because, well, at the end of it, she recommends swiping away the swiping apps for good.

If you have been reading my posts, you will know that I recommend the same, and I’m a single guy. Simran is a married woman. Both of us have reached the same conclusion — she by interviewing thousands of singles and me by, umm, experimenting with different avenues to meet a few of those singles 😉

A quick disclaimer – some people say online dating works for them. I believe those people. But there seem to be very many people who aren’t cut out for it. Plus, nothing beats meeting people in real life, however you orchestrate such meetings.

This post hopes to elucidate on why swiping away those swipey apps seems to be the best course of action for the courageous single person.

Apps suck because they don’t allow you to make an impression the way you would in real life. If your pictures don’t ‘catch the eye’ you are getting nowhere with apps, even with the most well written bio on the planet. Make no mistake — in the real world, most women will not make snap decisions based only on your looks. There is a lot more that goes into an interaction in real life.

With apps, so many things need to fall together for you to meet a person — first a match, then you have to hope you don’t screw up the initial banter, then get her to find you interesting and finally to get her to meet you. Woah! That’s a whole lot of work! Which is why I say — ditch those apps and just get out as much as possible.

Getting out and making moves in real life takes work, and it even takes courage — but it beats waiting around and believing that an algorithm has your best interests at heart. It doesn’t.

Over time, I have seen that more and more people are starting to suffer from dating app fatigue — especially with the same people hanging out on the various apps. So what gives?

We live in an attention deficit world

Dating apps are the epitome of this condition that humanity is struggling to come to terms with. Deciding that you ‘like’ or ‘dislike’ a person by looking at their best pictures is a self defeating strategy in the long run. You’re only driving yourself deeper into Instagrammy consumerism and fickle decision making by doing so.

Ok, if you’re driven by purpose and passion, you might not identify with this, but if you aren’t yet on a call of duty as far as your life’s work is concerned, you are probably searching for meaning in your life. Work is one way to derive meaning. Relationships are another. The online world constantly reminds you of the life you could have, while the real world is anything like it. This void between what could be and what is is only getting wider, and dating apps seem to make it harder to bridge the divide.

A picture is often not worth a thousand words

When I was on dating apps, on the rare occasion that I did match with a woman who I ended up meeting, I realised that looks and well written bios are a weak proxy for interestingness. Some of these women were not capable of speaking a hundred coherent, well thought out words, let alone a thousand. Wasted time — all my witty banter and humour down the drain, and I have to pay for it. Ouch! Time is too short for that shit, my friend!

Ego is the enemy

With the proliferation of dating apps, women are placed on a pedestal. Not because they want to be placed on a pedestal, but because that’s what desperate men do. Given the ratio of 5 men to every woman on Indian dating apps, women are getting more attention than they ever have experienced. For a lot of women, this is working to inflate their egos, making it only harder for guys to match with and connect with them. I have actually matched with women who then ask me to go and follow them on IG. The cheek! Screw you woman!

Virtue by the wayside

Simran wrote about how one of her friends matched and chatted with a guy who then (just before they were to meet) divulged he was married. I don’t know about you, but more than anything, I pity the married man who is on an app looking for a fling. I pity him for so many reasons. I don’t want to be that man, ever. I’ll happily cut off my little limb and store it in the freezer but I will not be the married man on a dating app. That’s when you know your life is more off track than you think it is. In my book of ethics, it is pretty simple. If you want to play, stay single and make it known that you want to play. If you want to commit, do so and stick to it. If you can’t stick to it, break all bonds so you can go back to playing. Either way, man up and face the consequences. Own up to your stupid actions of the past but stop making more, as that will just push you deeper into the quagmire of horse poo you already find yourself in.

An alarmingly large number of women I have encountered on such apps use them just to bask in the glory of an innumerable number of matches, some light hearted banter and may be, if they’re lucky, a date or a hookup. While women complain of matching with creeps and married men, men complain of having to send out hundreds of messages in order to get responses. Either way, I have no time for either. Few people seem to be meeting using these apps, and so it is best to give yourself a better chance and actually show up to real events / parties / meet-ups in the real world, where you will actually meet some people!

All said and done, like most things online, dating apps give you the appearance of making it easy to find love or sex or whatever you are looking for. But it isn’t making it any easier. It only digitises the process and makes it more long drawn out.

It is a bit like a person wanting to start an online business thinking that the 2 billion people on the internet are a proxy for high demand. As it turns out, having more options doesn’t exactly make choosing easier…

Here are some other things dating apps do (to guys):

Men are losing the ability to man up and approach or start conversations with strangers.

Swipe happy and lonely. That describes the experience of most guys on apps. Whatever happened to going up nervously to a woman you fancy, trembling as you are, sweaty palms and racing heart, only to blurt out a ‘hi’ and hope that she wants to talk to you? Doesn’t that sound far more exciting than swiping on women who you will never meet?

The clock is ticking

Too much time is wasted on conversations via apps. From my perspective, if I want to chat, I want to chat in real life, unless I have already met the person. Also, too many women put up pictures that don’t accurately reflect the way they look, or their life as it currently stands. Too bad that apps let you upload pics from 5 years ago. Every app should have a 6 month filter — if a picture is older than that, you can’t upload it! I’m done meeting with women who look nothing like the pictures on their profile!

Apps avoid embarrassing blunders (which you can learn from).

I once went up to a woman while waiting around the bags carousel and started talking to her. I foolishly thought she was really into me, and she even gave me her number. She played along nicely in the days that followed. It turned out that she was married. She didn’t exactly withhold that from me. I just assumed she was single. But it was a downer and now when I think back, I don’t regret having done that. It is almost an interesting game to try and figure out if a person you are talking to is actually available and wanting to mingle. On an app, there is no doubt — everyone knows the agenda there!

Talking to strangers is fun

I do it as much as I can — at bars, coffee shops, wherever I am. I never know what might happen. Getting shot down brutally can also be made into a game. I’ve evolved as a person. I’ve met some really cool people. I’ve made friends from different parts of the world. Had I been sitting on my sofa swiping away on profiles, none of this would have happened. I now make Serendipity open her doors for me, as opposed to hoping that She will welcome me into her groupie.

Previously, I did not know what the word meant. Now, I do. And I didn’t learn it by copy pasting canned lines on Tinder and Bumble. Getting out and having real conversations makes you more self-aware, and it takes your conversational skills to a level where you feel like you can talk to anyone. Being able to communicate effectively is a superpower, in any sphere of life. Sending msgs on an app lyk dis is not a skill, sadly.

Sometimes I feel like a self indulgent A hole when I come across as giving advice.

But if the apps have failed you, or aren’t working for you, or you aren’t getting the results you desire, it is time to tack and make connections in the real world.

After all, a big part of success in life is giving yourself enough opportunities for things to happen. Making connections in real life can’t really be replaced, despite the fact that the entire world seems to be on a dating app.